IN THE RADIO ROOM... Jessica Offen

Jessica Offen is a producer at STERNTAUCHER Filmproduktion and director for brand and event films. With her extraordinary talent of effortlessly adjusting to differing topics, tasks and projects, she ensures that the organization of a film production runs smoothly and delivers reliable communication.

As a director with a sense for documentary work she has led corporate films for clients such as Olympus, Disney, Holiday on Ice, Stage Entertainment and Silpion. Additionally, she compiles editorial texts for Sterntaucher’s external communication. She supervised the PR activities for the cinema documentary 'Bonne Nuit Papa' while it was touring the cinemas.

She learned the basics in her Bachelor of Arts in Journalism/Media Management program in Magdeburg, from which she graduated in 2009. During her studies she created the 30 minute documentary 'extraOHRdinär – Leben mit einer Hörschädigung' for the MDR.

Films for employees at Olympus 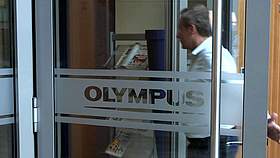